salt and pepper to taste

Place the oil in a skillet, cook the chicken, season with salt and pepper.

Ground the pork sausage, and add it to the chicken.

Add the rest of the ingredients, except the broth.

Cut the squashes in half, and season with salt, pepper, and parsley.

Stuff the squashes with the chicken mixture.

Place in a baking dish with chicken broth, cover with aluminum foil.

I`m pretty sure your family will love this dish, as my family did. Enjoy!! 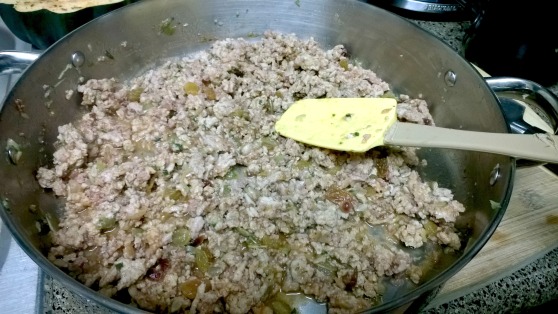 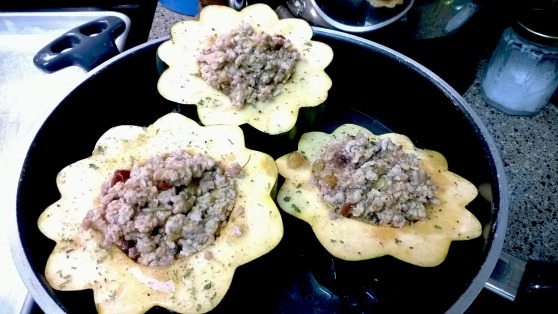 For making homemade vanilla, all you need is great vanilla beans, and alcohol of your choice: vodka, brandy, rum or gin. Originally from Mexico, the Vanilla Planifolia beans have a reputation of being the best, only after the ones from Madgascar.  I received a small package of Mexican beans, and decided to do my own homemade vanilla extract.  They got a little dry after storing them in the cooler for a long time, but in the end the drier the better, because they have less water content.

My alcohol of choice was rum, and the one available was dragon berry and strawberry flavor.  The advantage of  making your own vanilla is that you end of with a good product, free of artificial flavors, colors and sugar.  The vanilla beans can be reused up to 3 times, when then you should add more alcohol and new vanilla beans.  It should be kept in a dry and dark area; resting time is from 8 weeks to a year, and is recommended that you shake it daily. 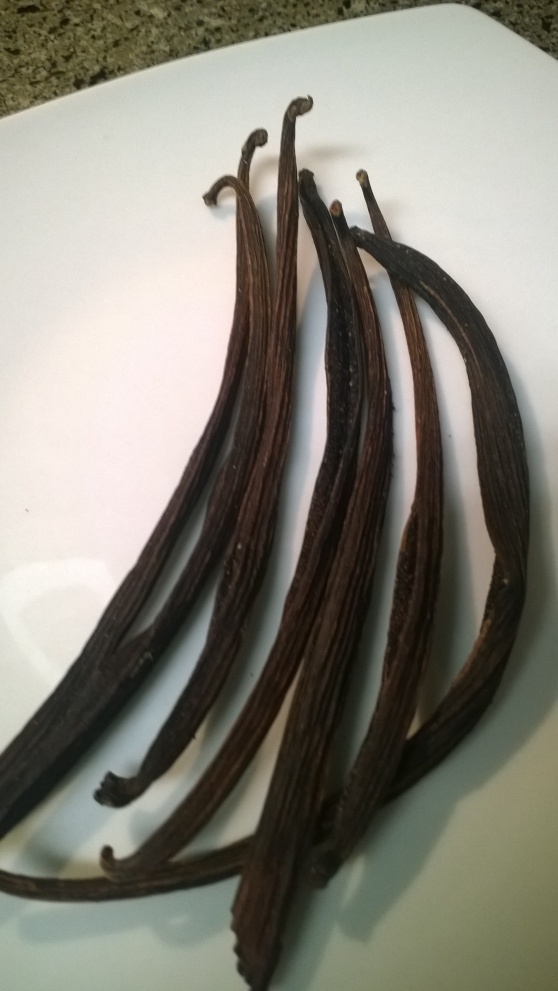 These are my 8 vanilla beans the first day, back in August 17, in the alcohol of choice: rum.

This is the normal appearance of the alcohol, the murky liquid is due to the vanilla seeds flecks.  At the end of the resting period, you can either leave them in the liquid or strain then with a paper coffee filter.

– Place the alcohol of choice in the jar

– Cut and submerge the vanilla beans in the liquid

This vanilla can be use for cooking, baking, and as a flavor rum for drinks. Enjoy!!

Thank you for following,

Great combination of sweet, hot and savory.  And if you have a bacon fanatic in the family, like I do, this is a delicious way to do bacon with a twist.  Only 4 ingredients and 20 to 30 minutes in the oven.

Ingredients: 1# Bacon, 1/4 C brown sugar, and 2 teaspoon Dijon mustard, and 2 teaspoon of chilli powder or Sriracha sauce.  Mix all these ingredients together, and rub the bacon slices, transfer to a baking sheet pan, and bake for 20 to 30 minutes.

Mini Polenta Cakes w/Chicken Salad.  I had try this recipe multiple times, and always is a favorite of my family and friends.  Maybe is the delish combination of sweet from the dried cranberry and the salty kick from the parmesan cheese and  the polenta. Very simple and stress less when you use a chicken from the supermarket Deli.  This is an original recipe from Giada De Laurentiis with some variations.  Enjoy!! 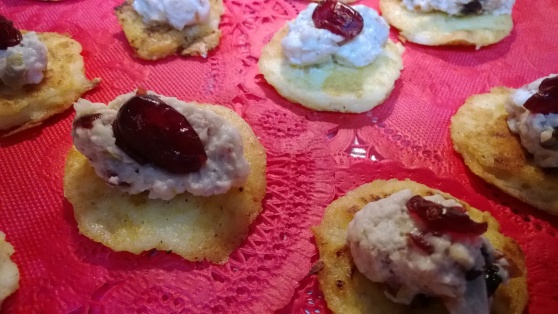 Polenta ready to cool with parmesan cheese on top 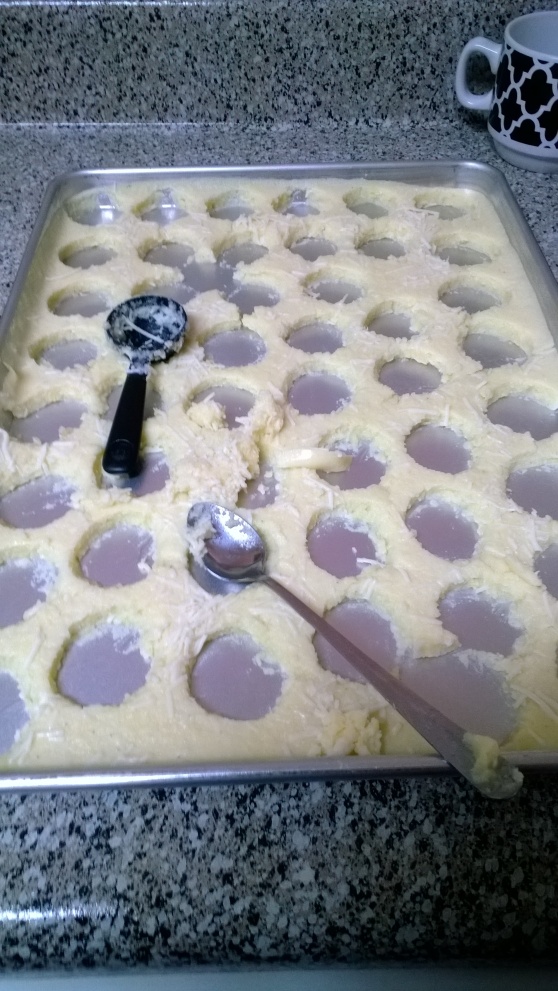 Frying then without oil, to get a little crust and color

The Quinoa  is a seed, not a grain, but is refer as a “super grain” or “the mother of grains” . It is a staple in the South American cuisine, and comes from a  plant related to the spinach, beets, and Swiss chard.  It can be can be use as a substitute for rice or pasta.  High in unsaturated fats, protein and lower in carbohydrates, very easy to cook, and cooks in half the time of rice, and it multiply by 4 times in volume.

Wash and rinse Quinoa. Moving constantly pan fry the Quinoa in a saucepan with 2 tablespoon of olive oil for about 3 minutes.  Add the chicken stock, salt and pepper and cook cover, until fluffy and the grain change the original white color.  Let it cool, and add the rest of the ingredients. Season to taste.

If you want a moist turkey this coming Thanksgiving, you have to try a dry brine for your turkey.  To brine is to submerge the turkey in a solution of water, salt, sugar and herbs in order for the turkey to absorb liquids and salt. This method is a little tedious and it will take a chunk of space in your refrigerator. But you can achieve the same results by using a dry brine, that will only use salt, seasoning spices and herbs. For my dry brine I used table salt, 1 teaspoon for 2# of turkey, paprika for color, black pepper,  fresh rosemary, sage and thyme.  Put the turkey breast facing down in a plastic bag, and refrigerate for at least 30 hours. After the first day, move the breast facing up.  This method will render a lot of water in the bag, remove turkey from bag, discard the bag and let the turkey drip, before roasting.  !!Feliz dia de Accion de Gracias!!

Coquito is a traditional alcoholic beverage, serve during Christmas Season in Puerto Rico. Similar to eggnog, but with rum.  Its  a combination of coconut milk, coconut cream, milk, spices, and rum.  Another variations of Coquito is called Ponche, similar confection that incorporate eggs yolks for a cream and rich texture.  There are  a lots of ways of doing Coquito, that vary from personal preference.  This is how I do it……

Ingredients:  3 c of  Palo Viejo Rum, I prefer this one because is a very strong and good rum, with lots of aroma and great to combine with sweets, but any other will do. 1 can 14 onz. Coconut milk, 1 can 14 onz coconut cream, 1 can 12 onz. evaporated milk, 1 can 14 onz. condensed milk, cinnamon bark and ground cinnamon, 1 small slice of fresh ginger, 2 star anise,  nutmeg, 1 vanilla bean, and a pinch of salt.  Note: the amount of rum is a matter of preference, I prefer to taste the sweets only at the beginning  and to have an strong alcoholic taste at the end.

Follow me:  Simmer the evaporated milk and the coconut milk, with the cinnamon bark, ginger, star anise, nutmeg, and the seeds of the vanilla bean plus the vanilla bean, and salt.  Simmer for 15 minutes and do not let the milks boil. Remove from stove and let it cool and steep  for another 15 minutes.  Strain, and add all other ingredients, mixing in a blender.  Refrigerate before serving and serve with a dash of ground cinnamon.  Salud….

Hi my friends, we know holidays are here already, we been seen the festive decorations even before Halloween.  As you know  Thanksgiving Day is the 28 of November, and we are getting ready to feast.  Most people are preparing the traditional Thanksgiving dishes, others are doing some traditional Christmas dishes, according to their own heritage. Because I`m getting ready to move, and had  already  pack all my crafts stuff, and trying to sell all my painting projects before moving all I can do while packing, is cook, and that is exactly what I`ll be doing and showing you some of my recipes for appetizers and or traditional dishes from Puerto Rico, were I`m from.  Ham and Chicken Rolls is a recipe that I do as an appetizer,  or as a side dish, and everyone that taste it, love it.  Hope you like it too.

Ingredients for the breading:

How To:  Start  by lying flat a piece of ham, topped with a slice of Swiss cheese, and one  spoon of the chicken mixture.

Form the rolls very tide and do not pinch, because the cheese will float out.

Start the breading:  Bread  the rolls, in this order: flour, beaten eggs, and Panko, or any other bread crumbs.  Make shure you get the breading at the ends too.  Put in the refrigerator for at least 30 minutes before frying.  Fry in medium high for a couple of minutes or until crispy. 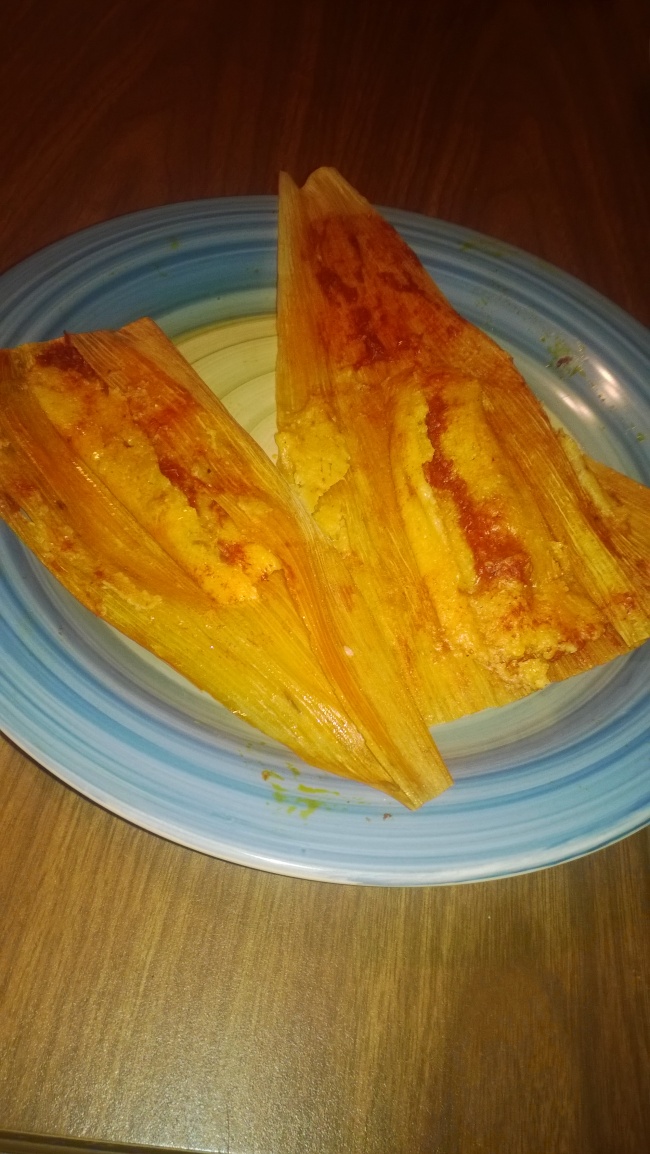 I had taste several kinds of Tamales, cause I like them so much.  Since moving to Texas, were you find such a variety of southamerican fare, I was very curious on how to do a mexican staple, Tamales.  I had read countless recipes from the internet, and look at some videos, but none of then like having an experience tamales cooker teach you first hand.  So that great mexican cooker is Letty, my son`s  mother-in-law, that is visiting from San Luis Potosi, Mexican state.  There are a lot of different types of Tamales, green tamales stuff with ancho chiles, red tamales with pork, sweet tamales (new to me) made with condensed milk, and fruits.  Delicious.  Will talk about sweet Tamales in another post, today is savory Tamales with pork and Guajillos chiles.  One of the two most important ingredient or steps in doing Tamales is  the pork lard…….yes pork lard, and the way you mix the masa.  None recipe will tell you that you have to mix the masa, until your arms fell from your shoulder, literally.  I will, believe me, when I made my first batch of Tamales, folllowing a recipe from the internet, I substitute the lard with oil, and did not mix the masa  enough and they came out to solid and hard.  The pork lard is the key ingredient to make the masa fluffy and spongy.

6# of pork cut in small strips.  One strip of meat for each  Tamal

1. Cook pork until tender in plenty water, with garlic, onions, salt & pepper.  Reserve water for the masa and sauce.

2. For the masa: mix the pork lard by hand or in a mixer until creamy.  Add the masa, beef broth,salt, pepper, baking power and more  water as needed.  Start mixing, until you hear little explosions sounds coming from the masa.  This will take from 20 to 30 minutes.

3. Prepare the Guajillo sauce, clean the chiles from stem and seeds, boil in water until soft.  Reserve water.  Mix the Guajillos chiles, with the roast garlic, onions, salt and part of the reserve water, or beef broth.  This should be a creamy not watery sauce.  Mix the pork with the Guajillo  chile sauce, and star forming the tamales.  See pics.  Enjoy!!!